Mercury, Venus and Mars have disappeared by the sky, and we are now left with Jupiter, which is well up in the southeast at sunset and is up most of the entire night in May. 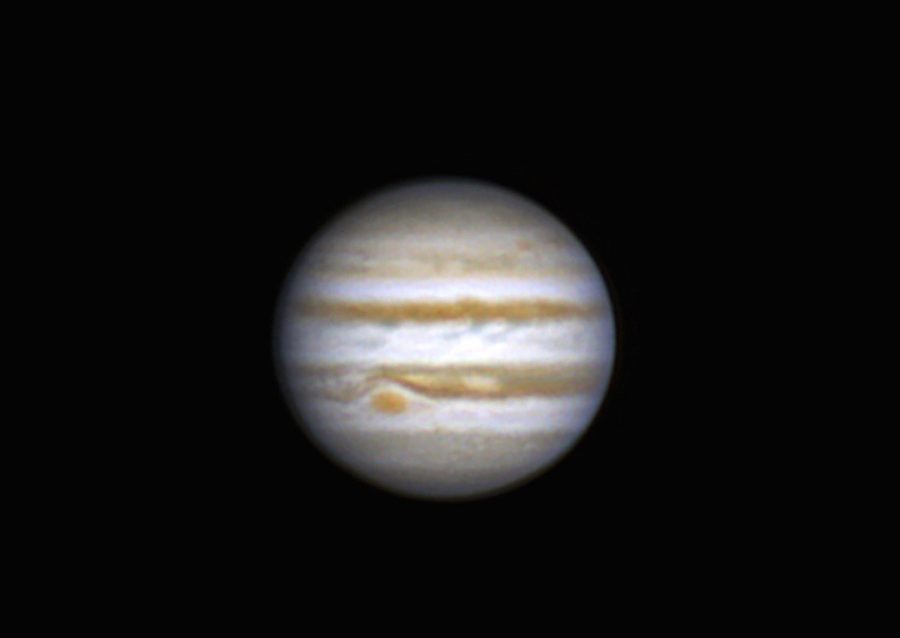 Jupiter is by far the largest planet in our solar system. At just over 140,000 km across, you could actually place all of the other planets combined within Jupiter’s massive bulk. And, if you were to hollow out Jupiter (like a pumpkin), you could fit over 1,000 Earths inside it!

Jupiter is the poster child for a class of planets known as “Gas Giant” worlds. These planets share four basic things in common. They are all:

In the case of Jupiter, despite its tremendous size and bulk, it has the fastest rotation rate. Whereas a day on the Earth is 24 hours long, a day is just under 10 hours on Jupiter. This rapid rotation rate, combined with its gaseous composition, causes Jupiter’s atmosphere to form amazing patterns: belts, swirls, eddies and at least one giant red spot that has been seen for over 300 years. The “Red Spot” (lower left in the above picture) is an intense area of high pressure (like a hurricane in reverse) known as an “anti-cyclonic disturbance.” The Red Spot alone could fit between two and three Earths inside it.

While Jupiter has many satellites, there are four that are especially easy to see and were discovered by Galileo more than 400 years ago; hence known as the Galilean moons. These moons are tidally locked to Jupiter and orbit around it in just under 10 hours. As such, the moons (which are very easy to see in a pair of binoculars) take on different patterns that noticeably change throughout the course of the night. 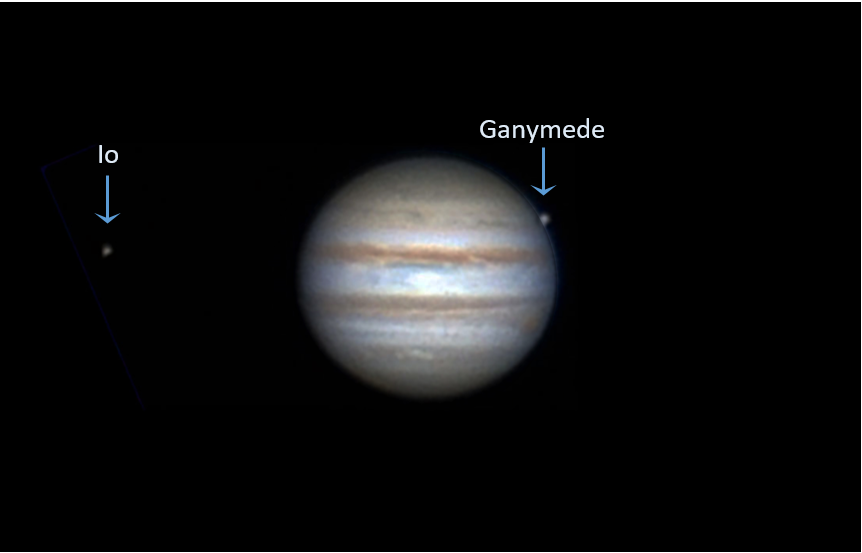 In this picture, Jupiter is seen with Io (at left) and Ganymede (at right). Also note that the Great Red Spot has rotated towards the lower right in the picture below as compared to the lower left in the picture above.

Boötes the Herdsman, Virgo the Maiden and Libra the Scales

In last month’s blog, we discussed some of the most prominent constellations in the Northern Hemisphere. In this month’s edition, we will talk about constellations that are ideal for warm weather observation.

First up, a popular way to learn how to find Boötes and Vigo.

“Arc to Arcturus and Spike to Spica”

If you use the drawing below to find the Big Dipper (upper right), you will see that the handle of the Dipper is curved. Another name for a curve is an “arc.” 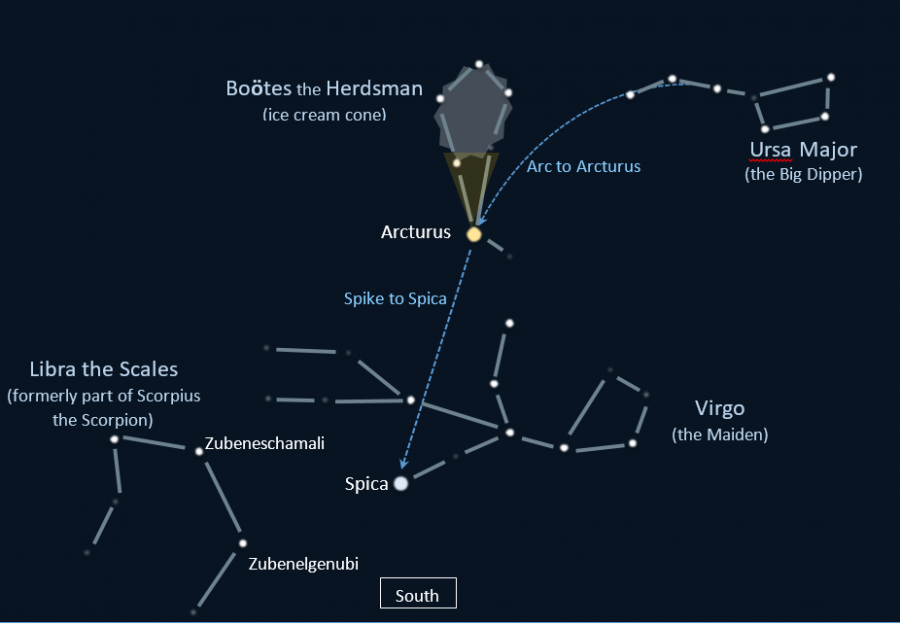 The original stories of this constellation originated in ancient Persia about 3,200 years ago, and were passed down to the Greeks through the Egyptians. About 2,200 years ago, a now-famous work known as Ptolemy’s Almagest recorded 48 fairly well known constellations. However, it was only about 1,100 years ago in which an outstanding astronomer – Al Sufi – working in Persia, published a book of the known fixed stars that has become the standard for much of the scientific naming conventions since.

However, the stories that formed the backdrop for the constellations are often varied and even the names of the stars do not always match up perfectly to the patterns that we know today (they may have matched better in ancient times).

Boötes is an example of a constellation that has a somewhat mixed ancestry. In some cases, he is identified as Arcas, the son of Calisto (we learned about this in the April Eyes on the Skies). In fact, the star Arcturus is often taken to mean “bear guard” or “guardian of the bear.” The name “Boötes” is thought to come from the sound that Greek herders made in rounding up their animals.

If today, we wanted to reinterpret these star shapes into a new constellation, it’s easy to picture Boötes as an ice cream cone. Arcturus makes up the bottom of the cone with a star up on either side completing the pastry. Then the remaining stars make up the ice cream itself.

Spica is the brightest star in Virgo the Maiden. Like Boötes, there are several stories to explain Virgo.

In a story from the Classical tradition, Virgo represents Persephone, daughter of Demeter. Demeter was the fertility goddess responsible for the growth of all crops. Persephone was captured by her uncle – Hades – and forced to stay with him.

Demeter searched the earth in vain for her missing daughter. In sadness, she neglected the crops, which withered and failed. Eventually discovering the whereabouts of her daughter, she demanded Persephone’s return. Hades, however, confirmed that she could not leave as she had drunk from the underworld. By agreement between them, it was agreed that Persephone would live half the year with her mother and half the year with Hades. During the half when she is with her mother, Demeter is happy and the weather is good and the crops grow. During the second half, however, Demeter misses her daughter, so the weather is poor and the crops fail.

Spica means”ear of corn” and the star represents the crops that Demeter looked over. It is eight times further away than Arcturus (nearly 250 light years). It is 10 times more massive than our sun and seven times the diameter.

The constellation of Libra represents the scales of law or justice, an interpretation that originated in ancient Greek times.

Libra was actually considered part of its neighbour to the east – Scorpius the Scorpion. As such, the stars in Libra are actually named for the “claws” of Scorpius. The northern claw is “Zubeneschamali” and the southern claw star is “Zubenelgenubi.” The middle star is “Zubenelakrab.”

In early May (night of May 6/7), a meteor shower known as the Eta Aquarids (originating from the fall constellation of Aquarius) can be observed. Because meteors are always best seen past midnight and the first quarter moon will have set around midnight, the best time to see this shower is from around 11:00 pm until sunrise. 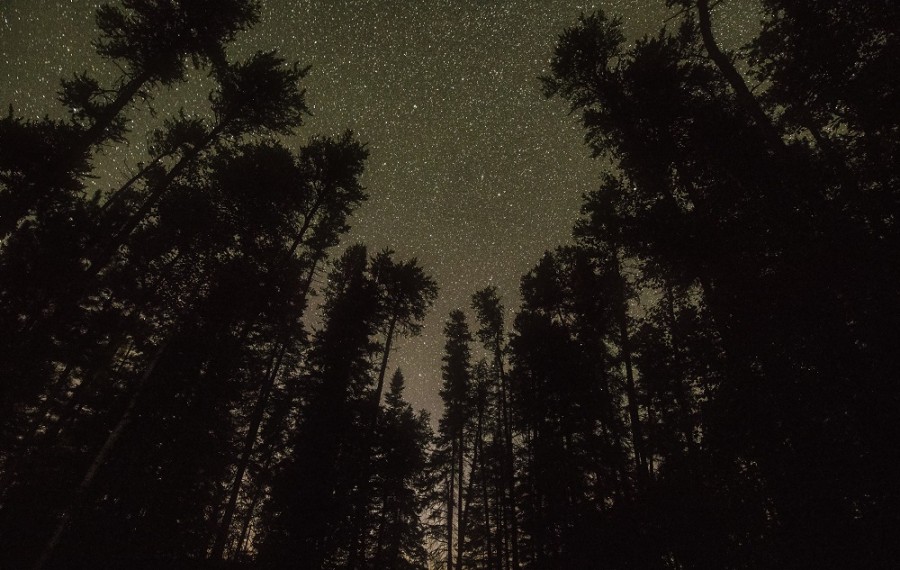 For those willing to stay up, the show can be quite spectacular in the dark pristine skies of our parks and as many as 60/hour can be seen on good nights.

As always, the best way to prepare for a meteor shower is to get lots of rest, use sunglasses for at least 3 days prior to the shower (to maximize your eye’s night vision capability), set up a lounge chair and a sleeping bag (use some sort of dew cover or your bag will end up quite wet), get lots of drink and munchies and, best of all, enjoy the experience with some good companionship.

This completes our review of May skies…

Remember, our parks invite exploration of the day and the night,and the stars await those who make the effort to enjoy them!

Our garden is producing, it comes in as a trickle, then the veggies really start...

It rained here, but was able to catch a glimpse of the red moon, and...

This is the CDC site’s data tracker. https://covid.cdc.gov/covid-data-tracker/#datatracker-home

Here we are going into year 3 of the pandemic, we had the lock down...